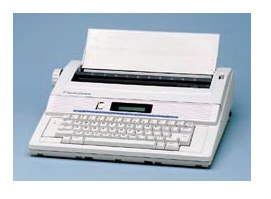 I was talking with one of my siblings a few weeks ago and a memory flashed in my mind that I had completely forgotten. In the fall of 1990, my brother was entering his senior year of high school. My mother had attempted to help him with his applications but it was not going well. At the time, I was a recent college graduate, living at home. She asked me to take over and help him complete the Common Application.

I stepped in and everything that I suggested, he had an answer for why it did not need to be completed in that exact way, or at that exact time. But for every excuse he had, I provided an answer for him and in the end, I prevailed and we pushed on with the writing. What I remember so vividly is the machine we were using. It was a state of the art typewriter that allowed you to type one line at a time, that appeared on a digital screen, and you could make corrections while it was on the screen. Once you hit enter, it appeared on the paper and you could not change anything. But I remember thinking that this thing was amazing, and a huge aid in trying to create an error-free (paper) application. I have no idea what he wrote about, I just remember the verbal parries that culminated in me getting him to complete and mail his applications as well as the machine. It looks like a relic now, but at the time, I felt so lucky that we had such a deluxe set up to write.

He got multiple acceptance letters, some great scholarships and graduated from college, with a job! It is ironic that years later I was drawn to this work professionally. Maybe my mother saw something back in 1990!

2 thoughts on “My First Client”

This is a text widget. The Text Widget allows you to add text or HTML to your sidebar. You can use a text widget to display text, links, images, HTML, or a combination of these. Edit them in the Widget section of the Customizer.
%d bloggers like this: